In this blog we briefly highlight the elements that make up an effective, highly functional, automated and integrated home cinema.

Previously, a home cinema room with its accompanying system would require an array of remote controls which had to be used individually to switch on all of their respective functions. Nowadays, home cinema automation will help you to get the most out of your home cinema system. Without it, you may end up spending a great deal of time and effort in just switching on and initialising all the settings that are necessary to start that movie you’ve been meaning to watch for ages. In this blog, we will briefly highlight the elements that make up an effective, highly functional, automated and integrated home cinema.

The benefits of automation

So if you’ve already invested in creating your own bespoke home cinema setup, you may as well add an automation solution that will enable you to switch on all the necessary functions to embark on your immersive viewing experience at the flick of a switch or the push of a singular button. 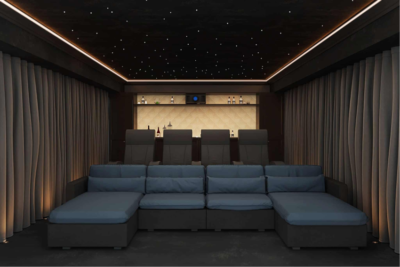 These control systems not only allow you to program the settings so that the audio and visual are integrated and enabled at the click of a button, but they can be programmed to the extent that they also enable your desired lighting and environmental settings. This means that as soon as you press that magic button, your recliner extends, lights dim, your screen initialises, the amplifier warms up, and the temperature adjusts to your desired level. Nothing could be simpler and more convenient than total integration. These control systems can be additionally programmed to have a pause or interruption function which, for example, will pause the film automatically and brighten the lights when your mobile phone starts to ring, so that you never have to miss a single second of that film you’ve been waiting to watch.

There are several brands that offer user friendly and highly effective function integration for home cinema systems including industry leaders such as Savant, Control4, HDR, and Crestron. Companies such as these offer their own fully customisable and programmable control panels or universal remotes, all of which utilise a form of wireless technology to communicate with the equipment, usually in the form of infra-red, radio frequency, or internet protocol. With this in mind, for convenience sake, it would be wise to select equipment for your system that all use the same form of wireless technology. They also have their own dedicated mobile apps so that you can control your home cinema system straight from your mobile phone. These days it isn’t even necessary to have a remote; it can all be activated via a voice controlled interface. Each approach of course has its advantages and disadvantages, though the end result is the same.

Furthermore, products from companies such as these are also often immediately compatible with streaming services such as Netflix, Amazon, and Hulu, not to mention smart speakers such as Google Assistant and Alexa, as well as gaming consoles like Xbox and Playstation.

For an all encompassing, integrated home cinema automation solution, Mayflower London would recommend Crestron with their 4 series processor along with their latest fully customisable and programmable 70 Series touchscreen panels. These will enable a fully integrated system that allows you to start all the necessary functions for booting up that film that you’ve been longing to watch, from dimming the lights and drawing the blinds to setting the temperature and firing your amplifier up, at the press of a single button.

Maintaining and programming home cinema control systems as described above has been one of Mayflower London’s specialisms for over a decade. Our team of automation specialists not only design, supply and install home cinema systems, but also help our clients to choose a control system that suits their exact needs and subsequently program it accordingly, offering our clients the opportunity to have their chosen array of customisable settings at their fingertips, ready to be activated.

Request a call back

Mayflower International is following Government advice closely and taking all necessary precautions. The health and wellbeing of our employees and customers is always our top priority. Therefore we want to re-assure all our customers that we have put in place continuity plans to ensure providing as many of our services as usual.